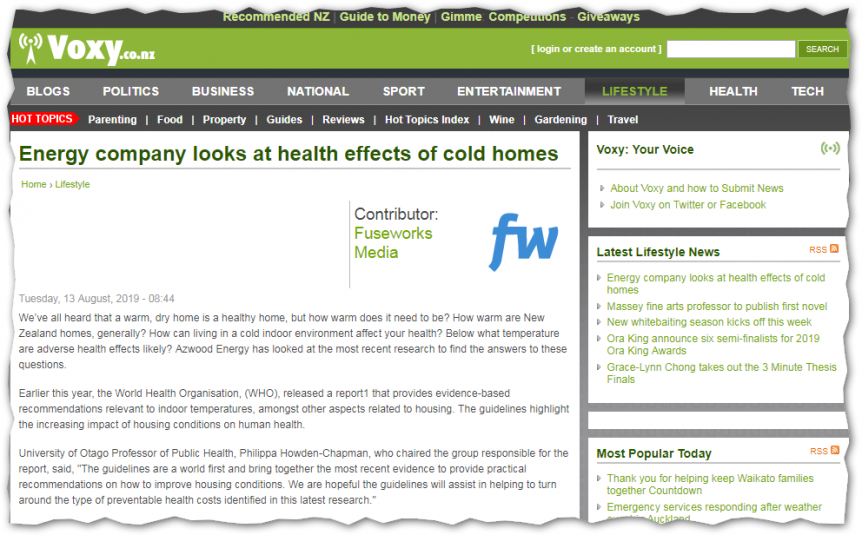 “The WHO report found that cold indoor temperatures have been associated with increased blood pressure, asthma symptoms and poor mental health. Cold homes contribute to increases in deaths and disease. It is estimated that in New Zealand 1600 additional people die each winter, with respiratory and cardiovascular disease highly prevalent in these alarming statistics. Elderly people, children and those with long-term illnesses are particularly vulnerable, (they spend relatively more time indoors).
The Real Costs
A recent New Zealand study3 found that preventable injuries and hospitalisations due solely to poor housing conditions could be costing more than $145 million a year in ACC claims and hospitalisation costs. It found that homes that were damp or mouldy caused more than 35,000 nights in hospital with an associated cost of around $35 million. An insulation subsidy programme in New Zealand, similarly, found reduced hospitalisation costs due to fewer re-admissions, fewer transfers and shorter stays in hospital.
Ministry of Health statistics show 6,000 children are admitted each year for ‘housing-sensitive hospitalisations’ and are nearly four times more likely to be re-hospitalised and 10 times more likely to die in the following 10 years.”
“What’s the Best Temperature
The WHO report found that warming cold homes will have significant health benefits. It said current evidence was insufficient to establish a temperature below which adverse health effects are likely to occur but noted that a minimum of 18 C is widely accepted. It found a higher minimum indoor temperature, up to 24C, may be necessary for vulnerable groups including older people, children and those with chronic illnesses, particularly cardiorespiratory disease.
Massey University’s environmental health specialists4 agree that cold and damp housing can worsen asthma symptoms,5 is associated with an increased risk of asthma development, respiratory tract infections and may contribute to excess winter deaths. They advise indoor temperatures below 16C increase the risk of respiratory infections, and below 12C stress the cardiovascular system.”
2 As quoted in https://www.noted.co.nz/currently/social-issues/1600-deaths-attributed-to-cold-houses-each-winter-in-new-zealand/
3 Study by He Kainga Oranga, the Housing and Health Research Programme, which examines the links between Housing and Health.
5 WHO modelling, based on a NZ trial involving children with asthma, found that every 1 C increase in room temperature was associated with a small but significant increase in lung function.
6 Winter Temperatures in NZ Houses, http://www.branz.co.nz/cms_show_download.php?id=8478d968515ad24b90d44165b95ee3f04e796a10
Content by Voxy.