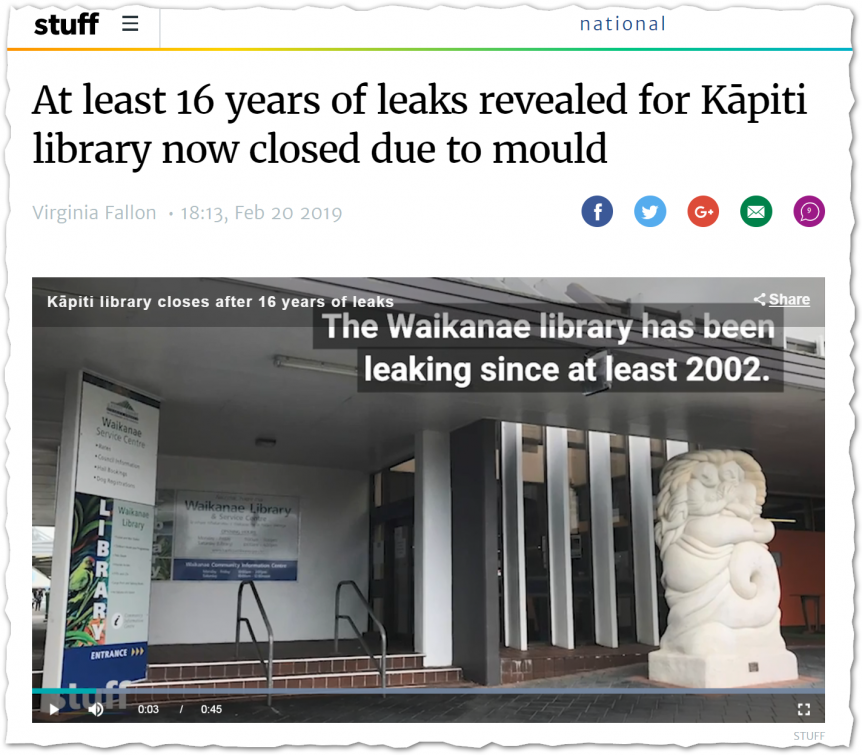 “At least 16 years of leaks, and months of staff health concerns, preceded the closure of a Kāpiti Coast library due to dangerous mould.Despite visible white mould, dripping walls, rotting carpet and concerns from staff, the library wasn’t tested for toxic mould until November 2018; four months after staff complained of asthma.The library was shut immediately after the test results and now carries a combined bill of more than $2 million to fix “design flaws” in the roof, cladding and windows.”

Design flaws are stated to be the root cause. Even if that statement is only partially true that’s sad. At least 16 years later health impacts are being considered and the building might get fixed – or more likely replaced at this point. Designing it right from the beginning would’ve saved significant amounts of money, health and time.

“Toxic mould – or Stachybotrys – can produce toxins that suppress the immune system and cause cancer; another mould discovered in the building – Cladosporium – can affect the respiratory system. It is particularly dangerous to infants and older people: Waikanae has a median age of 62.”

I’m not sure if they found Stachybotrys or not it isn’t clear from the article but liquid water leaks from rain can grow the entire spectrum of toxic moulds. It is clear that the perception and willingness of New Zealanders to just put up with leaky & mouldy buildings is changing … and that is a good thing for our health. The question for designers and architects is if we design the way we always have and it resulted in mouldy buildings most of the time (over 50% of NZ buildings have visible mould in the latest BRANZ survey) shouldn’t we fix the way we design new buildings?