I bring you a cautionary tale this month, because sometimes it’s the only thing that can be salvaged from a big mistake.
So many problems arise when people don’t know what they don’t know. Over a period of months, I’ve been on the wrong end of panicked phone calls from a client and her contractors. (Usually late on a Friday, which makes it worse.) The problems on-site during the build of this single-family home are of the costly, stressful kind and they trace back to a well-meaning architect and not enough oversight or advice from anyone thoroughly versed in Passive House methodology.
Here was a client who wanted a Passive House. She engaged us for Initial Design, and we duly outlined what type of components were required to reach that level of performance. Her architect, big on “sustainability” but not experienced in high-performance building, talked the client out of hiring us for the Detailed Design phase of the project.
That’s the phase where we explain how to put all the components together so they work and support the architect or designer and construction crew. I’ll explain that in more detail soon but first let’s look at how this job went pear-shaped.
The biggest problem was an air-control layer that literally could not be built as it was designed. (Air control layers matter, because that’s a big part of what makes Passive Houses so incredibly efficient. Think of it as extreme draught stopping. This, coupled with excellent levels of insulation, is responsible for the very stable interior temperatures that are the joyous hallmark of a Passive House.)
The roof assembly was already partly built by the time this was discovered. The client had paid for the roof to be built and then had to pay for it to be pulled out, scrapped and rebuilt: heartbreaking. When you understand the role and importance of the air control layer and are familiar with the construction of it, it can be designed on a single plane so it’s simple to construct. If you design a building and almost as an afterthought add in the air control layer, it will very likely be unnecessarily complicated (and thus more expensive) or worse, impossible to build. 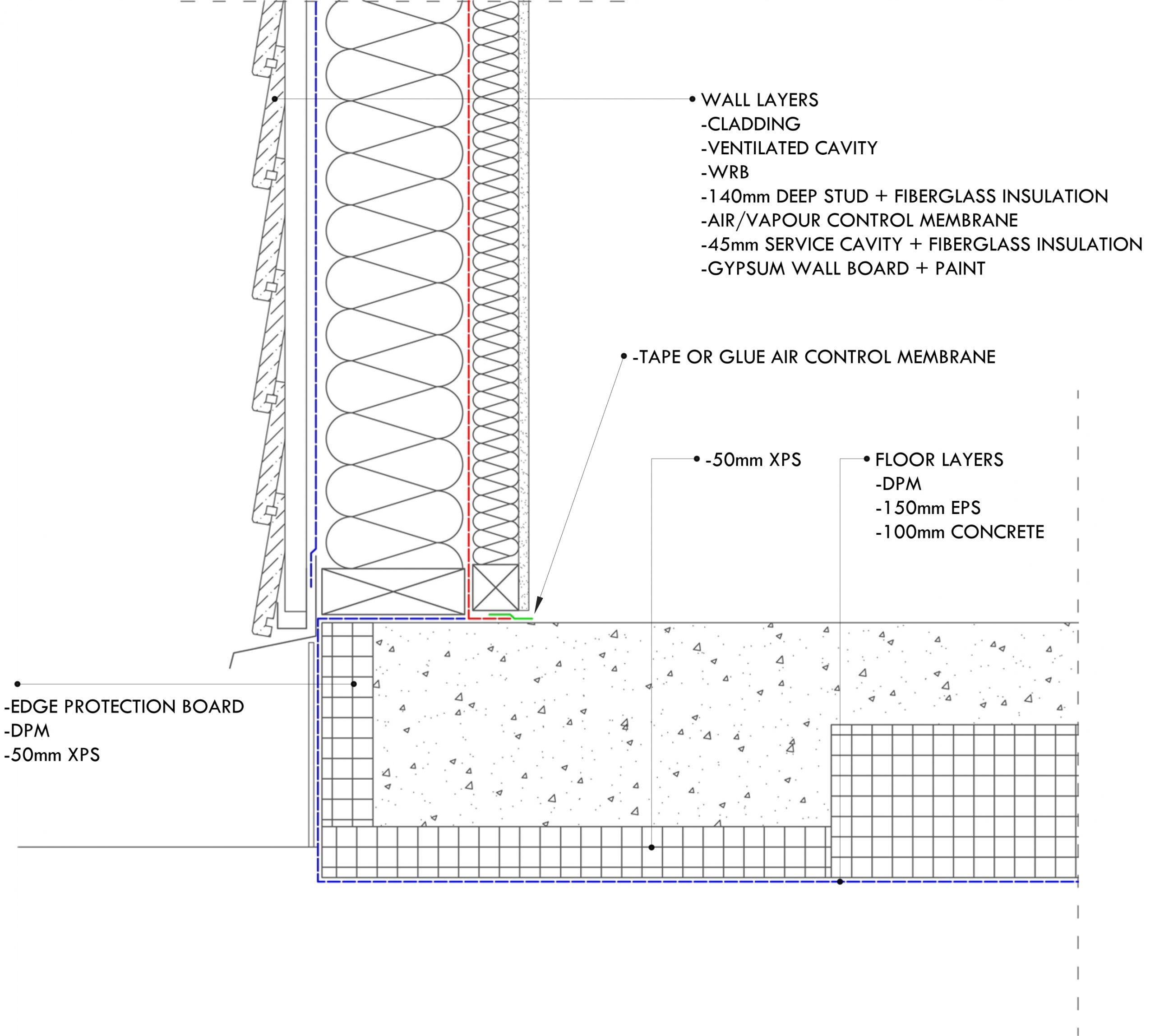 An example of a well-designed air control layer: clearly drawn and practical to build.

It’s worth noting that in this case, the builder hadn’t built a Passive House before either, but he was both extremely competent and committed. Without someone of his caliber on the job, it would have been much, much worse. (Do not hire a builder on price alone: there’s some free advice that will stand for all time.)
Initial Design work is great and our team has the capacity to get a lot of projects headed in the right direction. (I outlined the scope of that service in April, it’s here if you missed it.) But this job I’ve described above and some others made me realise that some projects need more independent advice.
So our Detailed Design Phase delivers highly-specific details and advice to the designer or architect so they can design the building to the required performance level. We review their drawings, model how any changes impact performance and provide feedback as needed. We’ll give recommendations about the best suppliers and products to suit that particular project.
I’ll keep on saying it: identify and fix problems at the design stage, not in the middle of construction! Reviewing drawings is an opportunity to clarify ambiguities while still at the drawing board. Providing designers with correct details for the ‘fiddly bits’ unique to high-performance construction can save time and money and prevent delays.
As you’ve probably guessed, this support is particularly important if your designer and/or builder do not have a lot of experience in designing and constructing Passive Houses.
There is another scenario that is about getting truly independent advice about which components to use and which suppliers to work with: who and what is best, what offers best value, the pros and cons of different choices. Passive House level windows and doors for instance, can account for 15-20 per cent of the cost of the entire project; our advice during Detailed Design could save you far more than the cost of our fee.
I am in a unique position as New Zealand’s only Passive House Certifier: every certified Passive House project in New Zealand (and some in Australia) comes across my desk. My small team makes it our business to know the intricate detail of every building component available here that is suitable for a Passive House. We have absolutely zero incentive—financial or otherwise—to recommend one supplier or component over another. I am that loud American with very big, blunt opinions: possibly annoying but really good to have on your side. I am not in the business of importing, installing or building, this company doesn’t sell stuff. What we can do is figure out what will work best, for you.
We can continue to support your project through what we call Construction Support, but I’ll leave that for next month. For now, I hope your navigation of entry into Level 2 has been smooth; all the best for the road ahead as we work out the new version of normal.