I always remember that Frank Lloyd Wright quote, “If the roof doesn’t leak, the architect wasn’t adventurous enough.” But what if you get rain inside on sunny days? No, we’re not talking about actual rain from outside. We’re talking about condensation inside the building, inside the roof space or on the roof structure literally dripping down on the people inside.

We’ve seen this happen in a whole spectrum of buildings in New Zealand, both in the North and in the South Island.  We’ve seen this in residential buildings, schools and offices with roofs of timber and with steel construction.

In most cases, when the design team, the architecture firm, or the building owner calls me, they immediately want to talk about the materials of the roof, and say, “Oh, this wouldn’t have happened if I used this material or that material. It’s because of this insulation or that material.”

But their instincts are wrong. It’s not the materials. It’s the way they were designed and how they were assembled. It is a design flaw. The primary issue is almost always a lack of an air control layer, combined with an interior moisture source (people, concrete curing, etc.), causing the dripping. With no air control layer keeping the warm, moist air inside the building from condensing when it contacts cold surfaces in the roof structure, the result is rain inside on sunny days.

How to solve it?

As you can imagine, fixing a structure that already exists can be expensive. Often, the proper thing to do is to replace the roof, but that option is obviously not really popular with architects or builders. In all cases, this could have been fixed at the design stage. Slight alterations to the design would have been fairly low-cost or even no-cost changes and prevented the dripping.

Here are three real example buildings that drip water from the ceiling: 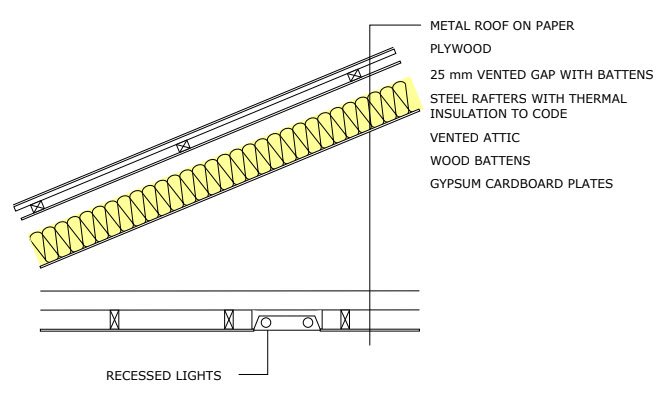 The first case is a large residential project which had metal roof on a plywood roof deck. It’s a beautiful colossal structure overlooking the ocean with lifts inside, multiple roof planes, roof decks, the works.

When I was called to consult on the construction, they’d already installed the insulation in the roof plane, the roof was on, and the joinery was in. And, water was literally dripping through the insulation into the inside of the building. When I looked at the plans, there was absolutely no air control layer anywhere. There was a plasterboard ceiling planned but it had many penetrations and was not able to be detailed as an air control layer.

On top of that, it was nearly impossible to retrofit an air control area even though it was still at the construction process at this point, because the roofs were very much integral to the shape of the building and the ceiling plane shifted up and down.

How the problem was solved: The best thing to do would have been to pull the roof off and put insulation of the ply roof deck, making everything inside warm and using that as both the air control and insulation area. Unfortunately, other architectural details made that impossible at that point. The only choice left was to expensively retrofit an air control layer down at the ceiling plane, move the insulation to above the air control layer, and ventilate above that. 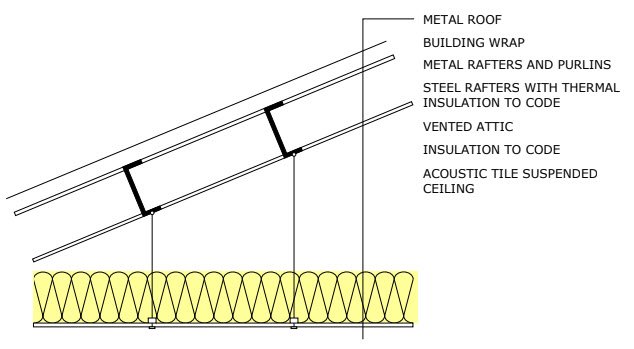 Around four or five years ago, I got a call from an architect of a school in the North Island. The students complained that on sunny days water was dripping onto their desks. They would have a couple of sunny days in a row in the winter and then they would have dripping.

Now, the architect done the right thing as soon as the dripping was reported. They stepped up and talked to the building owner, and sent in a team to take a look at the roof and take pictures. Now, these pictures of the inside of the roof assembly revealed water in patches over the roof but in those patches the water was everywhere—over the underside of the roofing underlay, the purlins, everywhere.

I talked to the lead architect about it and was shocked by their comment, “Well, actually we would never build a school (roof) like this again. We would always use wood purlins now.”

But the architect wasn’t drawing the right conclusion from the photos. I politely had to tell him that switching to wooden purlins wouldn’t make a difference. As the pictures showed, water was literally over the whole underside of the building wrap. It wasn’t the metal purlins it was the lack of an air control layer.

An ugly FYI, but as of 2018, this roof still drips and has not been fixed. 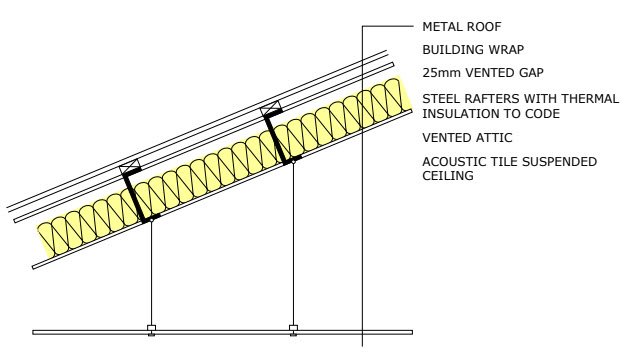 This case is a brand new office building, designed by a high-end architectural firm, council approved plans, and looks well built.  First winter and the roof is dripping—in an office building.

Examining the roof assembly, we again notice that there is no air control layer. The insulation, air control layer, and ceiling planes are not continuous. There is no simple fix at this point. Given the insulation is installed into the steel framing, it will not work very well. Unfortunately, it is insulating sufficiently to keep the roof structure cold enough so that as soon as warm, moist air reaches the roof structure, significant condensation occurred.

To solve the problem, the simplest solution is to put on a new roof. Ouch. And since the client’s already paid for the first roof, doing it right the first time really would’ve been cheaper.

There are many solution options before you have built the roof. But when you try to retrofit a roof assembly, it is much more difficult and expensive.

The take-away from the three cases

In closing, if you have a roof assembly and you’re in the design stage, take a look at where your air control layer and ask yourself these questions:

With these questions in mind, you should be able to avoid the worst case scenario of water dripping from inside your new roof.

Each month we will let you in on the inside information. You will know how and more importantly why, so you can avoid big, complicated & expensive problems with your buildings. High performance buildings, building science and Passive House.  Subscribe to our newsletter.