Clerk of works? It’s likely you don’t know one, don’t know what they do—and don’t know why you need one. Theirs is an old and noble profession. But the independent watchdog on a building site who sees all is just as necessary today.

The title goes back at least 800 years, which explains the medieval phrasing. The first incumbents were priests or monks (clerics, hence clerks) who supervised construction of cathedrals or royal palaces. Clerics got the job by virtue of being literate, which was then uncommon. They reported to and acted on behalf of the building owner, the church or the monarch! They were wholly independent and their job was to ensure the construction was done according to the plan and done properly. Many of the buildings they supervised are still sound today, centuries later. That single core focus on quality and key attributes of independence and working for the benefit of the building owner remains unchanged.

Clerks of works were still common in New Zealand until the neo-liberal reforms in the mid 80s. Who needs independent quality control when an industry and its players can regulate themselves? Legislation passed in 1992 dissolved the Clerks of Works Registration Board, amid many other reforms to the building industry.

The same economic deregulation happened in the UK. Coupled with recession in the 90s, the same results ensued: clerks of work were seen as an unnecessary cost and as providing unwelcome oversight to developers and contractors seeking to cut build times and costs.

What New Zealand got was a 47 billion dollar bill for fixing or demolishing leaky buildings. In the UK, the Grenfell Tower fire and other recent high-profile building failures prompted investigations, commissions and industry reflection, which has led to an upsurge in hiring clerks of works. 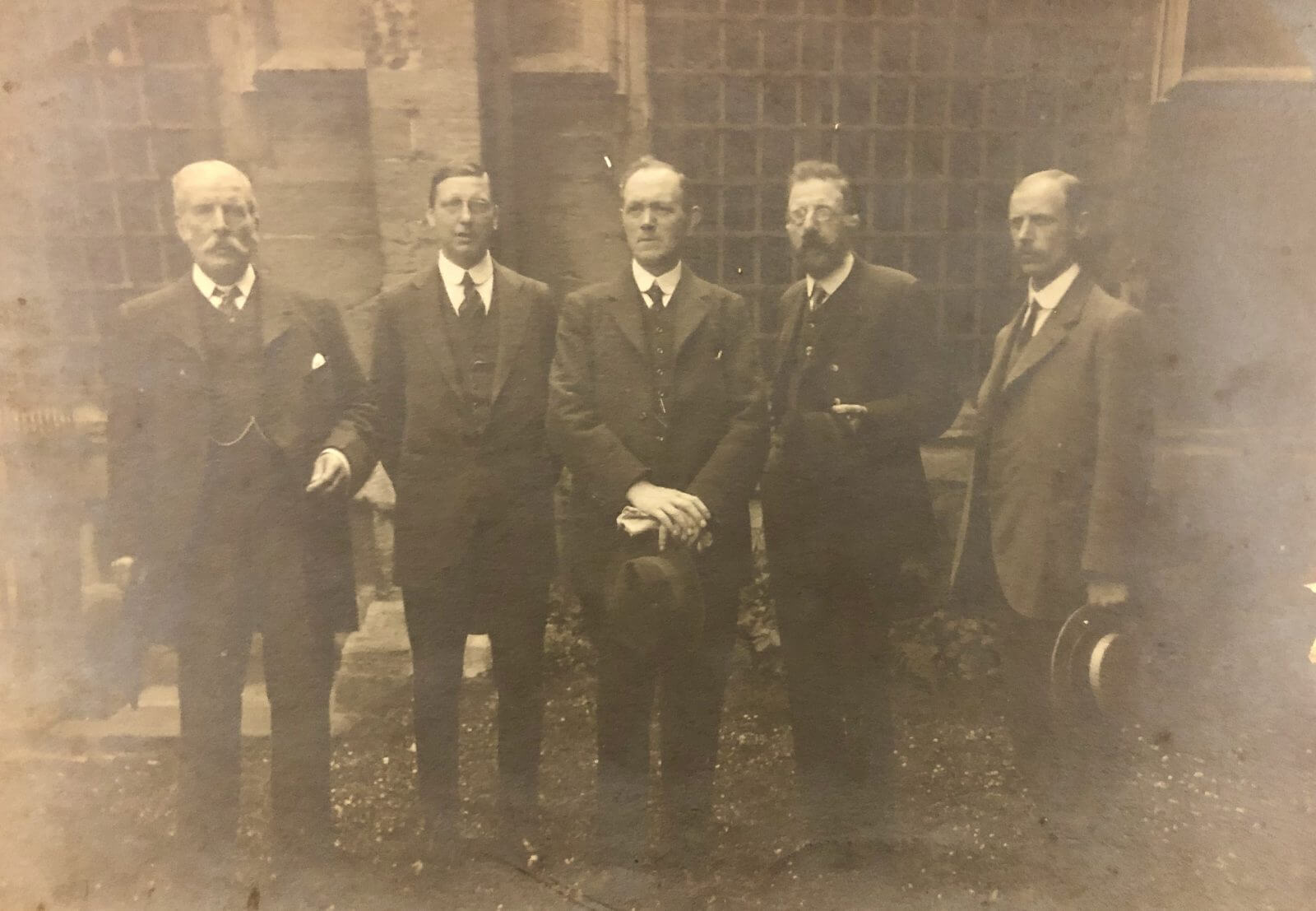 Not chaps to mess with: clerks of works for St George’s Chapel at Windsor Castle. Date unknown.

On a complex project, one or more clerks of works may be on-site full-time. On a residential build or smaller commercial project, the role is scaled down accordingly but the clerk must still be eyes and ears on the site regularly. He or she visits at critical stages, making sure the right materials are being used and installed correctly.

For instance, pouring a concrete foundation is one of the critical points. A clerk of works would verify the concrete was the right mix, the steel was the right grade (and set out, tied and spaced correctly) and the concrete was vibrated properly. Crucially, the clerk of works is there on the spot: preventing mistakes from happening, proposing remedial solutions when necessary and immediately documenting and reporting any issues.

Certified Passive House buildings have an advantage over those only built-to-Code because certification is undertaken by an independent third party. In New Zealand, that’s usually Sustainable Engineering, headed by engineer and Passive House designer Jason Quinn.

Nick Gaites is a director at Reveal Building Consultants, which specialises in building remediation, usually around watertightness issues. He’s also a Passive House consultant and serves as a clerk of works when needed. He says that part of the beauty of the Passive House certification process is having to produce evidence that the building was built as designed and from the specified materials. This is independently audited by the certifier.

“Almost every component installed into a Passive House is designed with a particular performance standard in mind. One type of insulation material might look exactly the same as another but it can have different thermal properties. The actual performance of the building has to match the output from PHPP [Passive House modelling software],” says Nick.

“To do that, you must ensure the quality control loop is closed. You design with particular products and you build with those same products and the clerk of works will check and gather the receipts and other evidence to provide proof to the certifier that the right materials have been used on site. The building won’t be certified without that evidence.”

So that’s the materials, but there is also the detailing side of things to oversee. On a Passive House, continuity of insulation and the integrity of the airtightness barrier are key. Dave Firth is also a director at Reveal Building Consultants and recalls routinely seeing botched insulation installs on standard builds when he was a building inspector. He is scathing about the low level of knowledge or care taken by many insulation installers.

Sustainable Engineering has included Reveal Building Consultants for clerk of works duties on proposals for several large Auckland projects. Jason is impressed with the Fieldwire software Nick and Dave use, which runs on their tablets. They take photos, annotate them, make notes on the spot and the report is automatically compiled and sent by the time they leave the building site. “It’s impressively fast. It speeds communication and also reduces their cost,” says Jason. “Clerks of works add a heap of value and are worth every cent.”

“We used to work on a rule of thumb that one hour on site meant two hours report writing in the office,” says Nick, but Fieldwire has changed much of that. “We’re not short of work. It benefits us and the client to get in and get out [of the building site]. It’s very convenient to do the report as you go.”
Nick is also conducting blower door testing on high-performance homes and thinks there is value in this crucial test of airtightness being carried out by an independent consultant. “The builder has a vested interest in passing the blower door test, they can’t be impartial if they are the ones doing the test.”

Forty years ago in the UK, the clerk of works was feared. He’d be easy to spot on the site because he was the only bloke wearing a shirt and tie. He was pretty much God. If he told you your bricklaying was substandard, you took it down, meekly. Then you did it again, the right way.
—Dave Firth

There are only a few registered clerks of works in New Zealand (Dave is one), who work in Auckland, Tauranga, Hamilton, Wellington and Christchurch. Outside of those cities, you’ll struggle to find one to hire. But Dave says there are many more people who are stepping into the role.

“Some of them are old builders, taught well by their dads or under a strict apprenticeship. They know the right way to do things and what happens if you don’t. Many others are building surveyors, lots of them UK-trained. The nature of their work means they become familiar with all the trades on a building site. They can be quite effective clerks of works,” says Dave.

Dave is registered with the UK clerk of works body—with the repeal of the NZ registration board, it is not a job that is defined by statue or a professional body in this country. However Dave and others are currently canvassing options for creating a NZ Institute of Clerks of Works.

If you want to get the high-performance house you paid for, but can’t find a local clerk of works, here’s what you can do.

Lastly, accept that you can’t have fast, cheap and good. Decide which you’ll compromise on. If you have to reduce the cost of the project, beware so-called “value engineering”, warns Jason. “If you don’t prioritise quality—and that means durability and comfort and less cost in the long run on maintenance or worse—no-one else will.”

Instead, he says, look for savings by reducing the footprint of your home (done well, you won’t even notice a 10% reduction in size) or economising on your kitchen fit-out.