New Zealand’s first certified EnerPHit project began back in 2019. A very expensive and complex undertaking, it’s taken three years to complete. Sustainable Engineering’s Jason Quinn got involved not as the certifier but the Passive House designer—unwillingly at first, he says. But the owner impressed him with his commitment to going the whole way and fixing the problems at the source. Despite a record number of thermal bridge calculations (and WUFI analysis), Jason shares the owner’s pride in a job well done. “When the architect first called me to discuss the job, I strongly argued that the wall insulation had to be external. Otherwise mould was a near certainty,” says Jason. “I didn’t want to touch the project if it wasn’t going to be done properly.” Looking at the existing design, he predicted the cold timber deck membrane roof would already be harbouring mould in the timber framing. This prediction was entirely accurate, revealed when deconstruction began. The owner was particularly concerned about this unwelcome discovery and this helped him decide to proceed with a deep retrofit and seek EnerPHit certification.

The original cold roof design meant mould was growing underneath the insulation in the bedrooms. The retrofit fixed that.

“EnerPHit is really black-belt level Passive House design,” says Jason. “Designing a new building for optimal energy performance is relatively easy, compared to being stuck with an existing orientation, footprint and structure. This house was a very complicated design and it had massive thermal bridges. We spent a lot of time designing those out. Then a lot of attention to detail was required of the builders onsite.” Jason estimates he did over 20 individual  thermal bridge calculations and resorted to hydrothermal modelling using WUFI software. Steel beam thermal bridge below the soffit, insulated and taped.

“The building methodology called for wasn’t that hard but it was finicky. Builder Terry Bryers [Bruyere Ltd] did an incredibly good job, particularly with the airtighting. This was painstaking work. Terry’s experience meant he could recognise when he’d hit a problem and needed to call me. Otherwise he just kept on doing what was needed,” notes Jason.

The Passive House design was completed in 2019 and Sustainable Engineering’s team has learnt a lot since then. Even with the benefit of hindsight, Jason says he wouldn’t do anything differently in this case. “We had already pulled out all the stops to reduce overheating, including adjustable external shading over the deck and low solar-gain coatings on the glass.”

The house is large, with massive windows that face into the heat of western summer sun. The design succeeded in reducing the cooling load, but active cooling is still needed to keep the temperatures comfortable in summer. A dehumidifier system is integrated into the MVHR system to keep indoor humidity levels comfortably low year round, despite average RH readings ranging from the high 70s to above 80% year round in this coastal location. 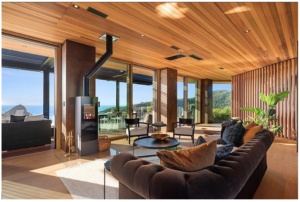 The air-conditioning units also provide what heating is necessary in winter. The wood burner is, in Jason’s view, decorative and only installed due to client preference. “The building doesn’t need much heating. However, the wood burner will operate in a power cut, so can be considered a back-up heating source.” (It’s typical of the redundancy found here: solar hot water heating is backed up by a heat pump hot water system, which is in turn backed up by a gas califont. That may be used once a year, when large numbers of people are entertained.)

See the case study here for more detail about the component method by which this building received certification and the slab-edge insulation solutions the design team settled on.

What does this landmark mean for retrofitting existing housing stock in New Zealand? The project budget here was rumoured to be around $13K per square metre. Are there lessons that can be applied to more modest homes? “This was a high-end building to start with, very complicated,” notes Jason. “Most homes would be much easier to retrofit than this one, because of things like the concrete midfloor and ceiling and how it extended out to become the deck in one continuous thermal bridge.

“The benefit for other EnerPHit projects is now we know where to look for problems. The next EnerPHit project we worked on has passed the crucial pre-construction review stage and is waiting for construction to start. Early on we saw the potential to remove the single internal brick wall and use internal insulation. With that sorted, we hardly needed any thermal bridge calculations.”

There are two more EnerPHits in the design pipeline at Sustainable Engineering, one in Christchurch and another in Whanganui. The latter is a 1910 timber-framed villa that is seeking EnerPHit certification on a step-by-step pathway. The first step is happening this month—installation of triple-glazed uPVC units made in Christchurch by NK Windows.

Jason is an outspoken proponent of retrofitting existing housing to certifiable levels of energy efficiency. However he concedes that privately owned retrofits of this magnitude have a very long payback period. “Retrofitting to this degree, I think you’d be a fool to sell it. I told the owner in Whanganui, ‘only put those windows in if you’re going to live in that house until you die’. The payback period in that case will probably be 25 years or more.

“That said, one of the upstairs windows recently fell out of its frame onto the roof below. Two more windows needed to be nailed in place or they would have shortly gone the same way. The joinery was past its life expectancy and the client was faced with replacing it anyway. In those circumstances, it becomes much easier to justify the relatively small premium between a Code-minimum component and a far superior one.”

Focusing only on the cost of retrofits obscures the value that is provided, believes Jason. “How can you only measure it in terms of dollars? What value do you put on the comfort of a year-round, house-wide comfortable temperature? Or the convenience of not having to mop condensation off windows and windowsills every morning for four or five months of the year? How much does a parent value their kids not having asthma attacks or being sick all winter with respiratory illnesses because of a cold, damp bedroom?”