“Most developers will choose to build to minimum standards,” says Palmer. 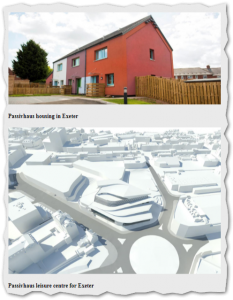 Architect Justin Bere, a Passivhaus specialist who has written a book on the subject, echoes this. “It’s very difficult for an ethical developer to do anything differently in the current climate,” he argues. “They (developers) are buying in competition with people who just want to achieve the absolute minimum in terms of acceptable quality and maximise their own profit. Where profit is king, larger developers are in a race to the bottom.”

“People don’t understand what a high-performing home is. Nobody really understands that the homes they’re living in are unhealthy and are having a detrimental impact on their health,” says Emma Osmundsen, managing director of Exeter City Living.

“I think people are going to understand that the only way to properly address the [climate] emergency that we face is by doing nothing less than Passivhaus.”