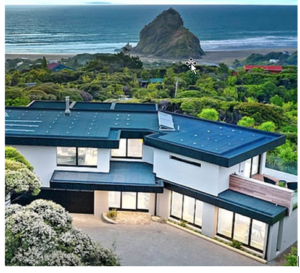 This is New Zealand’s first enerPHit project to be certified. This astonishingly ambitious retrofit stripped a large, luxury house built in 2008 back to its shell and rebuilt it to achieve certifiable performance. The result is a testament to the owner’s commitment and the skilled team of professionals that brought the project to fruition over a three year period.

There are two pathways to EnerPHit certification and this project achieved it via the component method. One notable exception required approval and this was obtained from the certifier at the outset of the Passive House design. Due to the structure of the two-storey building, insulation could not be applied above the ground floor slab. Instead, an external insulation skirt was fitted—a solution not without its complications when retrofitted to an existing building. This acted as slab-edge insulation plus the insulation was extended up to 600 mm down into the ground to reduce heat loss. Keeping the edge of the slab warmer prevents the risk of mould developing.

Minimizing the significant thermal bridges of the original design required painstaking modelling and analysis. Among the challenges was a concrete midfloor that ran right out of the building to form the deck, with occupied space below. A height difference needed to be retained in order to keep rainwater out. This required insulation to be fitted to the underside of the concrete deck, which didn’t line up easily at the deck/wall junction as the walls were insulated to the exterior. This thermal bridge was calculated and modelled until a workable option was identified (see image below). Despite being a comparatively modern build, mould was discovered when the insulation was removed from the ceiling cavity. The original roof was a cold timber membrane construction with fibre insulation and the presence of mould was predicted when the Passive House designer reviewed the original construction design. This greatly concerned the owner and helped spur the decision to proceed with a certifiable retrofit. Once stripped back to the shell, all existing roof timber was sealed in epoxy paint, the best practice for encapsulating mould. A warm roof was installed to prevent the cold/moist issues common with cold timber membrane roofs.

The airtightness result is a credit to the builder’s skill and care. At just under 1.0 ACH at 50Pa, this compares favourably to the 0.6 ACH limit for a certified Passive House. Airtightness was the biggest technical challenge the team encountered during construction. The leakiness of a direct extract kitchen rangehood and the sealed combustion exterior air fireplace together account for a significant fraction of this result.

The owner was delighted with how the house felt after its rebuild. For reasons unrelated to its performance, it was sold this year. The price was not disclosed but there was speculation in the real estate press that it would sell for more than six million dollars, setting a new record for Piha. Its new owners take possession in June and will no doubt be delighted to discover the warmth and comfort the house offers even in the middle of a damp and cold west coast winter. 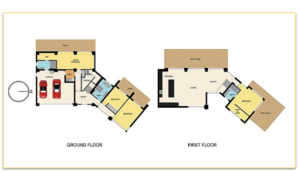 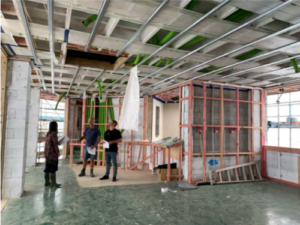 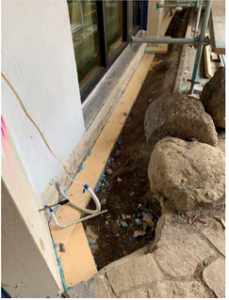 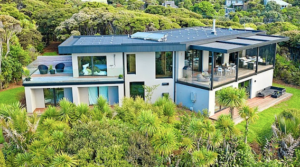 Toggle the Widgetbar
The authors of the articles on this website have used their best efforts to provide accurate and authoritative information in regard to the subject matter covered. The author and Sustainable Engineering Ltd make no warranty of any kind, expressed or implied, with regard to the information contained in these articles. The information presented must be used with care by professional who understand the implications of what they are doing. If professional advice or other expert assistance is required, the services of a competent professional should be sought. The authors and Sustainable Engineering Ltd shall not be liable in the event of incidental or consequential damages in connection with, or arising from, the use of the information contained in these articles/website. We use cookies to ensure that we give you the best experience on our website. If you continue to use this site we will assume that you are happy with it.OkPrivacy policy