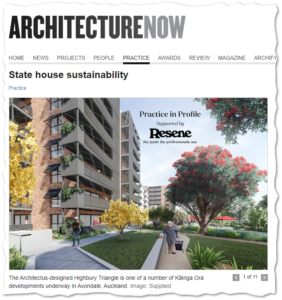 Kāinga Ora’s priorities for New Zealand social housing were laid out in a recent detailed article in Architecture Now, which is worth reading in full. It charts the agency’s journey toward building very high-performance homes, right up to Passive House standard, and slashing embodied carbon.

Sustainable Engineering has completed pre-construction (design stage) review and approval for Nga Kainga Anamata and Bader Ventura projects and look forward to reviewing and hopefully certifying them once they are completed.

It’s worth noting that Bader Harvard is aiming at the PHI Low Energy Building standard. However, given the high quality of the design and its construction team, we expect that project could hit the full Passive House standard also, should Kainga Ora wish to go down the certification route there.

Patrick Dougherty is General Manager for the Kāinga Ora Construction and Innovation Group. Here’s how he described how the housing provider got to aiming for Passive House performance: “We worked initially alongside industry experts to ensure the Passive House higher performance specification would deliver the outcomes and benefits we wanted to achieve, from both sustainability and home occupant perspectives. Once we were satisfied it was the right way to go, the design team rose to the challenge. That collective attitude was key because, in many ways, we are striving to innovate ahead of much of the industry.

“Having achieved that design endorsement [passing the pre-construction review, carried out by Sustainable Engineering] means Bader Ventura will be Australasia’s first Passive House public housing development funded by central government. It paves the way for further innovation in public housing and beyond.”

Kainga Ora’s other focus on measuring and reducing embodied carbon in their builds is also laudable. A new development in Wellington of four six-story apartment blocks drastically cut carbon emissions by specifying light-timber frames. Compared with traditional construction materials, it makes for energy savings of around 2000 tonnes of CO2: the equivalent, Patrick notes, of driving a car 201 times around the earth. Early contractor engagement (with McKee Fehl) is credited for this direction.