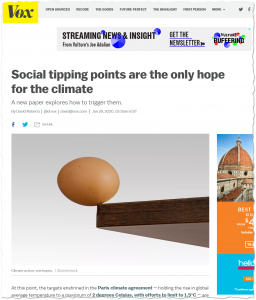 Systemic change is needed to fix the issues we have with buildings in New Zealand. It can’t just be left to individuals choosing to do better. Doing it right and thinking long term needs to become the norm.

Changing this social norm is really hard. Even folks that are fully on board intellectually with doing buildings right are still exposed to ridicule and feel that they are going against the herd knowledge. It often takes an early adopter personality or personal experience with living or working in high-performance buildings to motivate people to go against the norm and build better.

“If there is any hope at all, it lies in the fact that social change is often nonlinear. Just as climate scientists warn of tipping points in biophysical systems, social scientists describe tipping points in social systems. Pressure can build beneath the surface over time, creating hairline fractures, until a precipitating incident triggers cascading changes that lead, often irreversibly, to a new steady state.” “New research published in the Proceedings of the National Academy of Science (PNAS) attempts to remedy that. It constructs a framework for understanding social tipping points, the systems where they might do the most good on climate, and the kinds of interventions that might trigger them.”

“The systems that must change rapidly to address climate change:

[where] a) a small change might precipitate larger cascading changes, b) in a positive direction, in a way that c) could reduce a substantial amount of greenhouse gas emissions. [The researchers] found six.