It’s one thing to build bespoke higher-performing homes under contract for a client. It is quite another measure of risk to build spec homes that out-perform the Building Code minimums. There are currently two different developments in Christchurch, neither yet in construction, that are targeting LEB certification. Both are by Nest Residential. 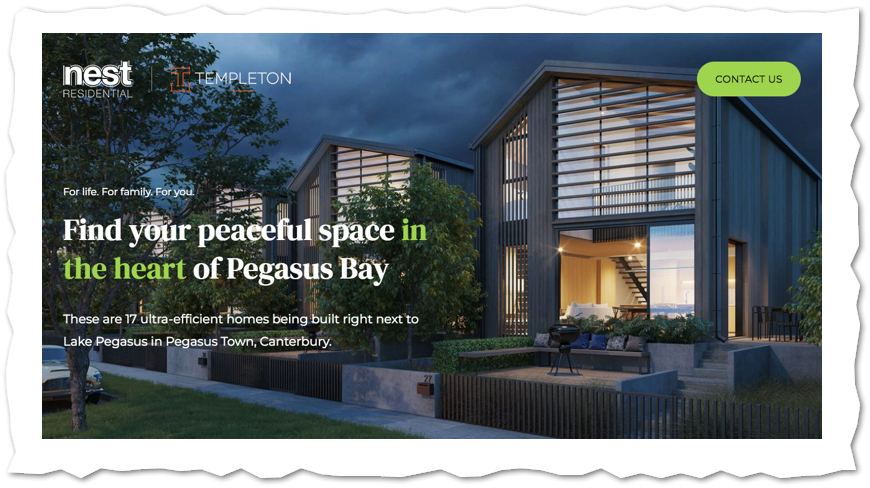 Artist’s impression of Pegasus Lakeside, a development by Nest Residential.

I’ve reached out to discuss these projects with both designers and developers after becoming aware of some spirited discussion online about how these projects are being marketed. The Addington project is an interesting case in point. The material specs are Passive House level. But the developer had to work within council building plane recession limits and that means a third bedroom pops out the thermal envelope. That room is costly in terms of thermal performance but absolutely essential to making the numbers work and the development viable.

Karen Manson also designed the Bushland Park homes, spec builds in Westmorland, that were successfully certified as Passive House Plus in March. “We are using all the same insulation specifications and window frame and triple[-glazed] glass specification as a full Passive House. There is no down-grade in specification. We meet all the surface temperature requirements,” Karen notes.

So what’s the issue? “The single story pop-out against the boundary … creates a lot more external envelope. The TFA is also low for higher density, which makes it harder [to achieve the target compared with] a larger single house.” The adaptation to the recession plane makes for a form factor of 3.78, relatively high, which combines with a small TFA (77m2). Good luck designing a building with those metrics to use <15kWh/m2/a unless your budget is unlimited. Karen has added some margin into the design with regard to airtightness, but even when she tweaks the model to assume a best-possible result, the heating demand drops a few kwH/m2/a but still gets nowhere near the magic 15. As for the project in Pegasus Bay, developer Simon Fenwick strongly made the point to me that certification of this project is not being driven by buyer demand. “This is driven by us and no one else. None of our clients are buying because of ‘Passive House’. Most have never heard of it—but we think it is the best of the certifications out there. If we told our clients that the homes [used] ‘Passive House principles’, it would make no difference to them. It is a really tough sell, especially in this market… Passive House tends to be driven by the knowledgeable few and in isolated projects only. We want it to become more mainstream, as it is important for so many reasons.

“The Pegasus project is similar to the Addington site: Weathershield triple glazing and lots of insulation. It just falls down slightly [because of] the amount of glazing to the lake and the fact that they are standalone homes with a lot of surface area.  We have to balance making them appealing, so we can get the value to build them correctly! We have to make a return, so we can do it [build homes like these] again and again. There is so much poor building out there and [New Zealand] seems to be heading in the wrong direction rather than improving.  We also like learning and growing on every project we do and working with Karen and Elrond has been great.”

(It’s worth noting that while recession plane requirements have sometimes had a negative result on building form efficiency, they won’t apply from August when amendments to the Resource Management Act (the Enabling Housing Supply legislation come into effect.)

Nest Residental is headed by Simon Fenwick and Mark Teesdale. They tell me they’ve been pushing the barrow for better-performing homes for years, even though they haven’t earned much or any premium for that performance, compared to a Code-minimum home built by their competitors. But they’ve made the numbers work so far and they believe in what they’re doing. Their first project targeting Passive House Plus certification (#58 Totara St, Passive House design by VIA architecture) has passed its pre-construction review.  Developers listen to other developers and I understand they have bent the ear of a very large player re the merits of Low Energy Buildings. I’ll watch how that plays out with great interest. Artist’s impression of 56 and 58 Totara Street, Christchurch, a project by Nest Residential.

It does highlight that Passive House has a bit of recognition as a brand now; more people have heard of it even if they mostly don’t understand the details of what it means. But Low Energy Building? That is not registering on anyone’s radar. So I acknowledge that marketing these better-but-not-best builds is a tricky tightrope.

I give the last word to Karen Manson: “We need to be clear that LEB performance is less but still very good. It’s not corner cutting, just a merging of commercial [realities] with performance.