Some advice from health professionals and articles on damp mouldy schools. We are building scientists and are not health professionals or even public health researchers (we strongly recommend listening to those folks and enjoy learning at Public Health Summer School each year in Wellington).

Advice for homes which is applicable to schools as well. 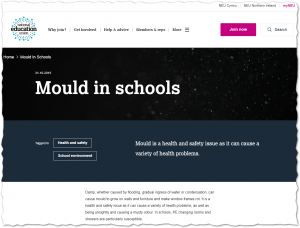 “What health conditions are associated with mould?

Inhalation of mould spores can lead to, or exacerbate, a wide range of illnesses/medical conditions. Mould can trigger allergic reactions and asthma attacks. Complaints of flu-like symptoms, migraines, dizziness, nausea and memory impairment are common. Very young children, the very old and those with immune system deficiencies are particularly susceptible. This is not a definitive list and advice should always be sought from a GP if it is suspected that mould is causing illness or exacerbating an existing condition.” “The principal of Waiopehu College in Levin Mark Robinson said the school’s learning support centre was closed last year after mould was noticed and the air tested. They found heightened levels of one or two things that they would rather not have seen. So whilst that building was then cleaned thoroughly and rectified as it were to get those levels down, the building was evacuated for a short time.” 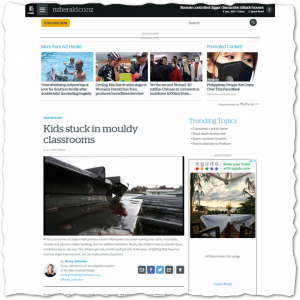 “Clayton Park School in Manurewa has closed four classrooms because of mould, and says others are damp and leaky, with fungi growing in ceilings and walls.” “Our children get sick. Our staff get sick. We have an ongoing problem with respiratory illness,” said Mr Wright (Principle). “We’ve been aware that the classrooms [have not been] safe for children to work in for a number of years now and so has the ministry.” 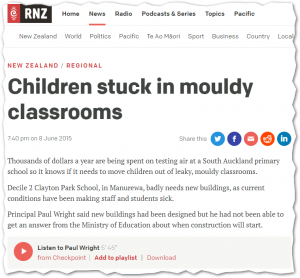 “Mr Wright said mould in his school’s classrooms was so bad children sometimes had to be moved out, and it was difficult to estimate how many children fell ill as a result of the damp classrooms. We get asthma, we get influenze, we get respiratory illness, we have had isolated cases of pneumonia.” Newsroom 9 July2019 Crumbling classrooms – how do we fix them? by Shane Cowlishaw