We need to talk about ventilation. Urgently. Specifically, policy-makers and industry need to arrive at an agreed definition of sufficiently ventilated when it comes to the indoor spaces where New Zealanders live, work, learn, play and train.

CO2 levels are a useful measure of indoor air quality. ASHRAE’s* journal just published a summary article by Stumm et al, which takes a fresh look at the guideline of 1000 ppm of CO2 as an upper limit in indoor environments.

This really gave me pause for thought. Ventilation is a balancing act in a heating climate like New Zealand. One the one hand, we value the results of ventilation—fresher air and reduced humidity—and the health benefits. On the other hand, most indoor spaces in New Zealand are already inadequately heated in colder months and outside of a Passive House quality build, ventilating more increases heating demand as hot air is lost to outside.

Stumm’s article starts by noting existing guides for ventilation use CO2 levels as a proxy for good indoor air quality. From many data points, industry has previously settled on indoor environments staying below 1000 ppm CO2. However, this number has been repeatedly revised and is now being debated anew. Several studies offer substantial evidence that extended exposure to even 1000 ppm of CO2 reduces people’s ability to think clearly and make decisions [Allen 2015].

In a 2016 study in the US, when office ventilation was improved and levels of carbon dioxide and emissions reduced, employees performed 61% better on cognitive tasks compared to the standard office conditions. By further doubling the ventilation in the first setting, cognitive performance more than doubled.

What really made me reflect is the authors’ point that CO2 levels outside continue to increase, ventilation alone may be unable to keep indoor CO2 levels at optimal levels. The theoretical solutions sound like something out of a science fiction novel: spacecraft CO2 scrubbers and oxygen enrichment. This dystopian vision aside, we need to design buildings for better ventilation rates now. Retrofitting to increase ventilation is expensive and complicated, especially in large buildings. Let’s stop building things we need to fix.

NIWA continuously records CO2 levels at Baring Head. Its clean air station has been running since 1972 and is home to the longest running continuous CO2 measurements in the southern hemisphere. This graph is frankly horrifying. 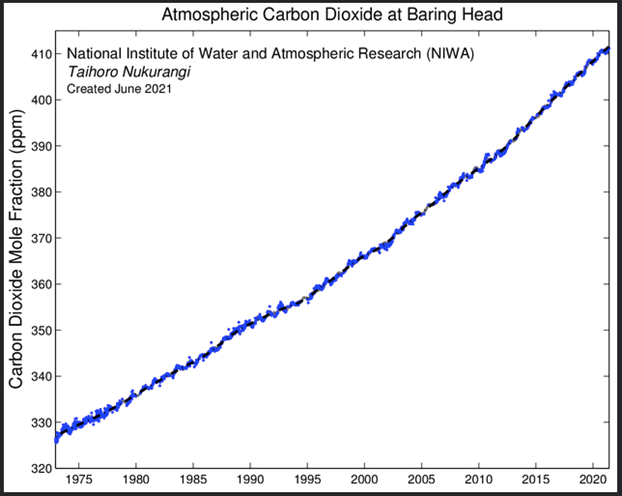 If we go on with intensive use of hydrocarbon fuels, climate models predict CO2 levels could reach close to 1000 ppm by 2100. That means not only an unhinged climate but significant reductions in humans’ cognition and decision-making abilities, even in ‘fresh’ air. Compounding that, our cities have higher CO2 levels than Baring Head because of the pollution and number of people concentrated there, so we’d hit the higher levels sooner than later.

Studies showing significant reductions in cognition and decision-making abilities include the following.

*ASHRAE is the American Society of Heating, Refrigerating and Air-Conditioning Engineers, of which I am a paid-up member. The Society has a very earnest and laudable mission: To serve humanity by advancing the arts and sciences of heating, ventilation, air conditioning, refrigeration and their allied fields.