Stop reductionist thinking and start thinking in systems: that’s my wish for New Zealand in 2020. In my field of high-performance buildings, that means modelling the building’s performance at design stage. Let’s do the maths! Folks claiming they’ve designed or own a high-performance house because it includes some Passive House principles or components really aggravate me. In the examples I’m thinking of, there was no predictive computer modelling; no effort made to actually understand what the client would get before it was built. Instead, just magical thinking and guesswork. Well, I’m calling bullshit on that.

His house had lots of the components typical of a Passive House: it was super-insulated, had awesome windows, a mechanical ventilation system with heat recovery (MVHR), even an attempt at a dedicated air-control layer. What did that get him? Not comfort. His house was virtually uninhabitable in summer, even with all the windows and doors open and the curtains pulled shut all day.

The design team guessed, and they guessed wrong. I’ll give them credit for wanting to build a better-than-Code house. But reductionist thinking (“If I stick in these things used in these high-performance buildings, my one will work the same way,”) is cargo cult behaviour applied to architecture. This magical thinking is delivering us houses that are over 30 degrees all summer long, forcing occupants into crazy compensatory behaviour. (Another Aucklander I know was forced to move from his rented property because the overheating was so bad it was giving him heart palpitations.)

Unless a building and its site is identical to one already built*, there is no way to know how it will perform before you build it. Not unless you model it. Let’s all repeat together: Modelling is the most important feature of a high-performance building. Not thermally-isolated concrete slabs, not triple-glazed German windows, not fancy air-control membranes. Doing the maths first is what distinguishes a genuine high-performance building and the client paying for one should insist on it. 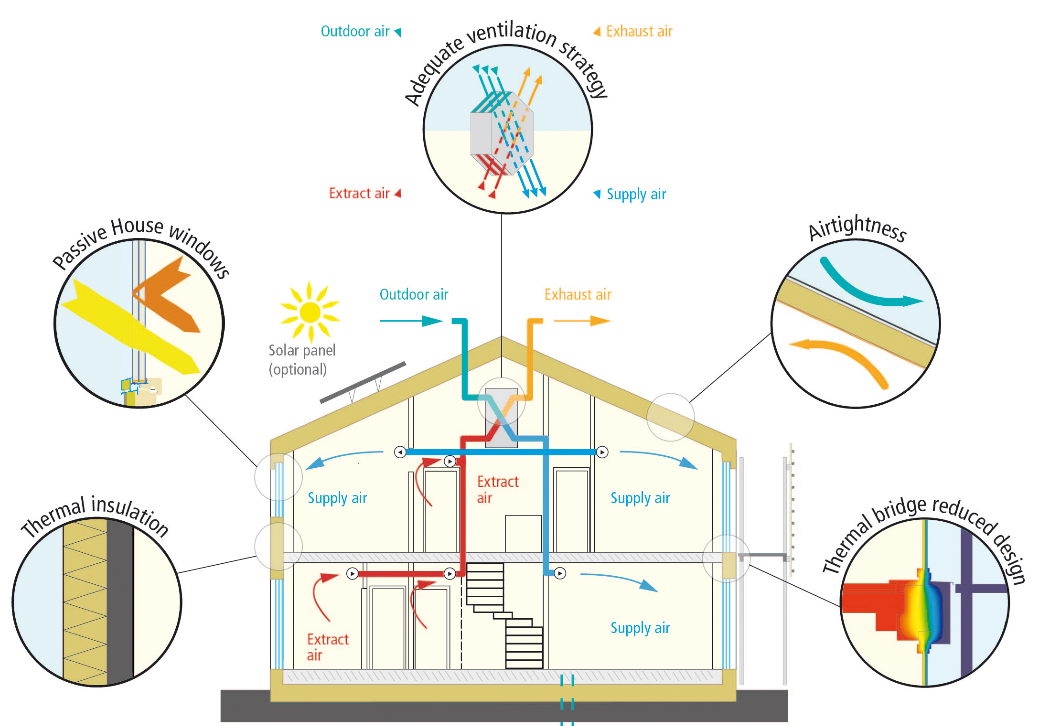 This explainer from PHI illustrates the typical Passive House principles.

Passive House principles are useful to explain what you did differently in a building, but not why or how much. All these principles have been broken at one time or another and in a properly-modelled building that is OK. If the building is big and compact enough, you can skip the super-insulation. You can design around horrible thermal bridging, or for a site with poor solar access or a house that opens to an incredible south-facing view. Even MVHR can be left out, in very specific circumstances. Knowing something contains flour, sugar and butter doesn’t necessarily make it a cake.

The Passive House standard offers a way to learn and teach system thinking about buildings. Genuinely high-performing buildings are not just the components, they are about how all those things interact. The Passive House Planning Package (PHPP) allows designers to model all the pieces as they interact in a true system, showing the overall impact on the way the building performs. No radios made from coconuts and straw.

When we do the maths first, we can modify the design and immediately see how that impacts performance in PHPP. Change the R-values of insulation, factor in landscaping that provides summer shade, take into account occupant behaviour … modelling different scenarios is so cheap and simple compared to having builders re-do work on site or leaving disappointed clients to install enormous AC units in order to survive the summer.

Expect to hear more from me this year about the vital need to design buildings that are comfortable temperatures in summer as well as winter: overheating is a new reality that is only going to get worse.

In 2020 I hope we can do the hard thinking first, then pick the right path. At least for buildings, that is relatively easy to do—which is good, given the other challenges we face.

NB My thanks to Professor Feynman** for the cargo cult metaphor: “The form is perfect. It looks exactly the way it looked before. But it doesn’t work. So I call these things cargo cult science, because they follow all the apparent precepts and forms, but they’re missing the essential parts.”

* Those who attended the IPHC in China last year saw how the Chinese are legitimately using this approach to roll out an entire precinct of Certified Passive House apartment buildings at breathtaking speed. The building design, site, shading and orientation are all the same and thus do not need to be individually modelled.

** Richard P. Feynman (b. 1918) was a professor at Cornell University and CalTech and received the Nobel Prize for physics in 1965. The quote comes from his 1974 biography, Surely you’re joking, Mr Feynman.