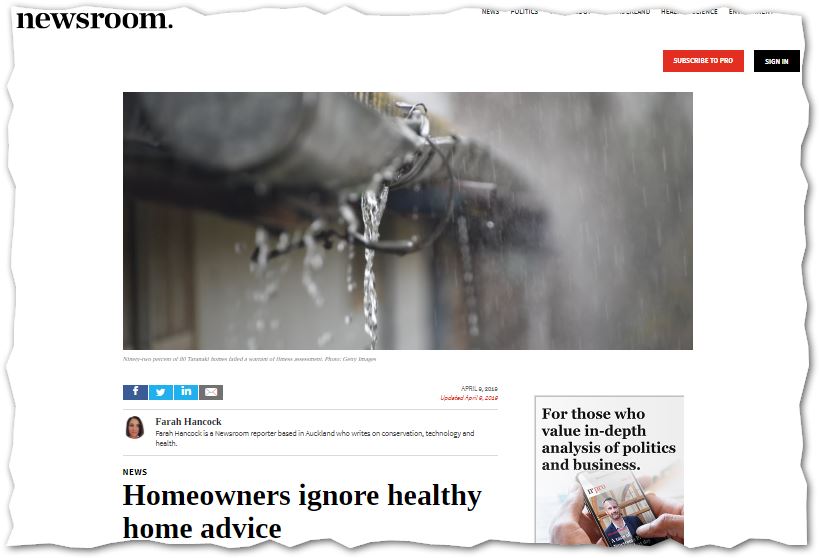 “ Homeowners understand the importance of insulation, but messages about other important measures which could make homes healthier aren’t getting through.
A recent University of Otago study of 80 homes showed 92 percent failed a warrant of fitness inspection. Despite being told of failings, the homeowners were reluctant to make changes believing they were unnecessary or would cost too much.
Professor of public health and study co-author Philippa Howden-Chapman was surprised at the reluctance for the low-cost measures which could make a big improvement.
Plastic sheeting placed under a house could stop an estimated 25kg of water per day from rising into a house. The sheeting costs around $200 to purchase and install.
She said previous work had looked at reluctance from some landlords to improve home as they didn’t directly benefit, but finding homeowners were also unwilling to improve the house they lived in was eye-opening.”

For a home on an elevated crawl space where you can access underneath this is an absolute must do. Even if the ground looks bone dry the moisture rate from the (dry looking) soil can be almost as high as standing water. I’ve worked on homes which had moisture problems in the roof space and the solution was to put plastic sheeting under the house! Over half of the properties didn’t have a ground cover under the house. Literally this is the cheapest step you can take to make your home healthier & dryer.

“They are people who had already put up their hands to say: ‘Yes, we know that insulation improves warmth and comfort’, but as we know that’s only part of what you need to do to keep your house really warm.”

“People didn’t feel that they wanted to do it. It was a kind of halo effect around the house. They felt their house was in better condition than actually the assessor thought.”

The original technical article is quite readable and important to understand how education of the general public will NOT be enough for them to fix up their houses – even if they KNOW it makes them sick and even if it is cheap and easy. Discussed in more depth here with links to the technical article.