I’m often asked for data on the price premium a certified Passive House would command compared to the same house built to the legal minimum requirements of the New Zealand Building Code. It’s hard to know as the numbers are so small and Passive House homes so rarely come onto the market. So far they have been rarely built with the intention to sell on completion (this was an exception). 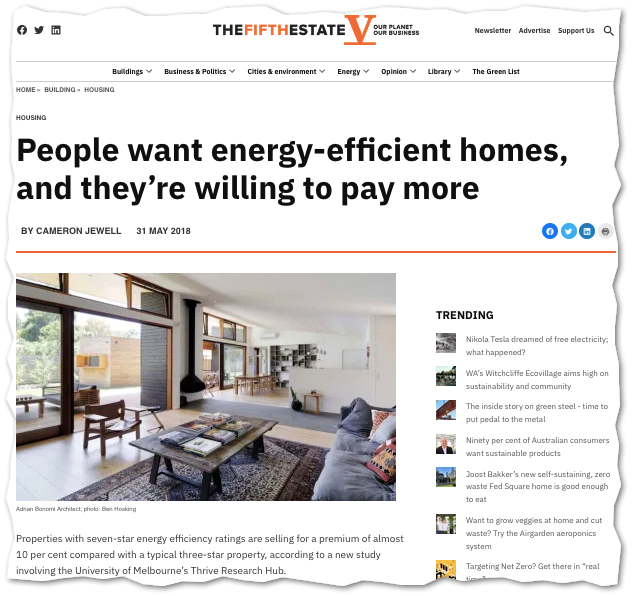 There is overseas data, including several good studies in the USA discussed here, but I’ve just come across an interesting study from Australia, titled Green Lemons? Energy-Efficiency Disclosure and House Prices (Fuerst & Warren-Myers). The abstract is below, but there’s also a short media article that summarises the findings:

“Using sales data from the ACT–Australia’s only jurisdiction with mandatory energy efficiency disclosure legislation–over five years from 2011 to 2016, researchers found that homes with higher NatHERS star ratings were selling for more.

Compared with a standard three-star property, those with five or six-star ratings attracted premiums of two and 2.4 per cent, respectively. But things got more interesting when homes overshot the current six-star minimum for new builds. Homes with a seven-star NatHERS ratings commanded a premium of 9.4 per cent over their three-star equivalents.”

(NatHERS is an Australian initiative, the Nationwide House Energy Rating Scheme. It awards a star rating out of ten that rates the energy efficiency of a home based on its design.) Abstract: This paper seeks to elucidate whether high levels of non-disclosure lead to adverse market outcomes in the form of the well-known lemons problem. It also empirically tests whether energy-efficiency ratings (EERs) are reflected in both housing sales prices and rents in the Australian Capital Territory, the only Australian housing market with mandatory ratings for all dwellings at point of sale or lease. Using a comprehensive dataset of sale and lease transactions during the period 2011–2016, a hedonic framework is applied. The analysis confirms that both the reported energy-efficiency levels and other sustainability-related characteristics that are not part of the formal rating assessment influence the pricing of both sales and rental transactions. Characteristics such as heating and cooling systems and the presence of solar power generators are significantly reflected in rents and sales prices, as tenants and buyers are likely to estimate their expected utility costs based on the EER. It is also shown that the option of leaving the EER of a rental property unreported presents a moral hazard for landlords of substandard properties, in that the likelihood of EER disclosure increases in line with the number of energy-efficient features of a property as revealed in the marketing material. The analysis also reveals that socioeconomically disadvantaged areas suffer from disproportionately higher levels of EER non-disclosure, potentially constituting a ‘double disadvantage’ of non-disclosure and low–energy efficiency dwelling stock. From a market and asset-pricing perspective, it thus seems preferable to extend the requirement to obtain and present a valid EER to the rental market.